This week we posed a number of questions to OutsiderXchangeS artist Sophie Lee focusing on her progress during the project as well as some thoughts on collaboration.

I felt it was really important to get to know each other before approaching the collaboration. I spent the first few weeks observing the way others worked and having conversations, becoming familiar with one another and comfortable in the space. For a while I was concerned my pace was too slow, but on reflection this period was very important for me. It was challenging initially to see a way in to collaboration with the artists with learning disabilities as they were very focussed on their own work, it was quite difficult to engage them in an alternative idea. However, over time Horace has become very open to testing ideas with Juliet and myself. Perhaps this is through spending more time together or maybe because the project has quite a heavy focus on Horace’s interest in school. I think it was really beneficial for the three of us to go on a trip to Horace’s old school, he regularly reflects on this shared experience. I feel it brought us together and firmed up our connection to this project.

Will the way you work in collaboration change now moving forward – was there a particular way you approached collaboration before?

When I’ve worked collaboratively in the past it has been very organic, coming together over a common interest or similarity in ways of working. It was a little overwhelming at first feeling pressure to find this in one another, but through conversation common ground was quickly established between Horace, Juliet and myself. It has been interesting to discuss our shared interest in schools, childhood and our relationship to architecture, but particularly exciting exploring our different approaches in how to communicate these ideas. Moving forward I see huge value in collaboration with artists working in different mediums and with different perspectives. This is really pushing my practice and stimulating my ideas. 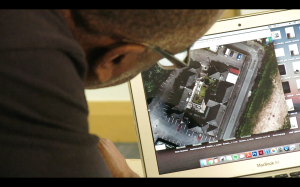 How has the OutsiderXchangeS project changed your art work?

Working on OutsiderXchanges has definitely encouraged me to become more playful in my practice. The focus being shifted on to the process rather than the outcome has helped with freeing me up, as well as working along side such a diverse group of artists.

How has it been working with artists who have a learning disability? Is there a difference? If so what is that?

The artists with learning disabilities are uninhibited and unpretentious which is really refreshing. It may be quite challenging to discuss the development of projects together, I have found it is better to experiment and reflect on how we feel afterwards. James and Martin have been key in supporting us in this, using questionnaire style worksheets is very helpful in giving a structure to reflection and allowing the artists voice to be heard. Almost always conversations about our collaborative projects go off on a tangent, this is one of the reasons that the work is playful and it really encourages a continued enquiry.

If there was one thing you felt proud the most about the OutsiderXchangeS project what is that?  – this could be a piece of work, a collaboration, the environment…

I am very proud of the studio environment we have built together, it’s a lovely place to come and work with a different atmosphere each week. Sometimes it’s really calming and others we are belly laughing all day. I’m happy to have met all of the artists and I’m excited to see what comes from our time together. Each artist is making engaging work that is authentic and honest, I am delighted to be showing work alongside them on some established platforms.

We sat with David today to have a chat about his work and collaborations on the OutsiderXchangeS project. Here are his thoughts:

“I’m trying to make the original painting come alive more by putting bits on top of it. 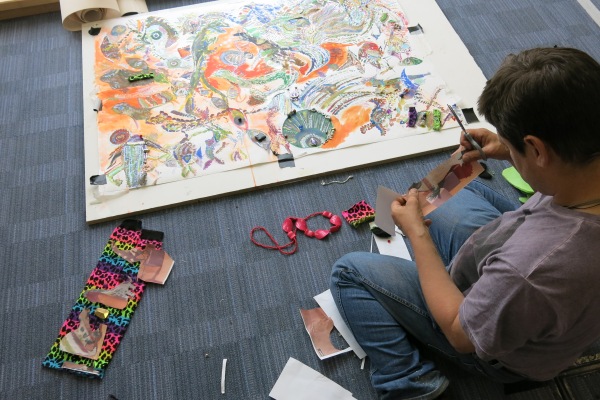 I’ve got socks from Southport which have lots of different designs, I picked them because they are colourful and different and they blend in with my painting. They also remind me of the animations I did with Matt early on in this project.

I’ve got some jewellery and beads which I’ve brought from home which a family friend passed on to me, I’m adding them to the picture as well because they are so different.

I like things being different, I like to do something different that no one else has done before. It is unique.

I’ve been looking at different established artists to add elements and how they work into my work and it has ended up looking nothing like their work, but has turned into something quite unique.

It is boring just being the same, it is more exciting to be different and unique.

Collaborating I’ve been working with Matt and animating figures with my work on top of them. This added to my work, because I started to add the shapes of characters into my work. When I’ve completed this it would be great to then go back with Matt and animate the dinosaurs and fishes in my work and to see how they look, I don’t know if that will be possible but that’s the fun of this work and collaboration.

Today I also did some interesting work with Roseanne which included sound, she has a set up that picks up minute sounds of springs and pen scratches using special microphones that pick up tiny noises. It sounds really unique and unusual. I added and dragged a bead necklace on the microphones which was recorded. This made me think about bringing sound similar to this into my main work, creating abstract noises for the animals and their movement which may then add to the animation work I want to explore with Matt.

Working on this project has been great, the development of using different art, collaborating and my artwork improving as well.”

Horace was the first person I met when I came to Venture Arts – I actually met him outside the building on the day of my interview and remember being intrigued by his interest in knowing the year I was born, but also a bit intimidated by his insistence in my name being Julie and not Juliet.

When ‘OutsiderXchangeS’ actually started, Horace, Sophie and I quickly got together thanks to our common interest in education, childhood, and ways of working which are not limited to the studio but also involve online research, discussions and trips around Manchester.

Horace has been doing his interview series on the theme of school days and we thought the Open Studios would be a great way to take this project further.

On Saturday 28th May, after Horace had been to church, we did five individual interviews in a small room next to our communal studio space where Horace first asked people questions about their childhood memories, before we asked them to build a small version of their school with wood blocks, so they could explain better how the school was structured, where their classroom was, where the head master or mistress’ office was, where they would play…

I was fascinated by how people would answer Horace’s questions in different ways: because they can be quite general (‘What were your school days?’), some people mainly spoke about the subjects they studied, some would enumerate the various schools they’d been to, one mainly talked about the games on the playground! Often the interviews are quite reflective for the people reflecting their stories, having to look back on fairly early memories and assumptions they had at the time (especially about the headmaster-mistress).

Some of the interviews were documented, but the important part of the work for us seems to be the live element, the special encounter with Horace and me in an intimate environment. Horace is being himself and speaking in the way he always speaks, I’m being myself as well… we’re not ‘performing’, but because it’s just the three of us and people have committed to the interview, I feel like this moment that we share together is slightly separate from the rest of the event and the discussions Horace can have with people the rest of the time. Where does the artwork/performance start and end? Who is performing? 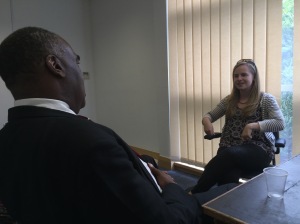 Throughout the interview, Horace, like he always does, impersonates different characters: the detached interviewer, his mum (“she told the dinner ladies ‘do not give Horace no pudding'”), the teacher, the headmaster (‘Where do you think you’re going?!’)… and the person being interviewed equally has to take on different roles: the adult recalling childhood memories, the pupil getting caught trying to get out of the school and having to justify themselves…

Horace also often uses sentences as ‘nets’ to catch us in this impersonation game, by ‘tricking’ us into finishing his sentences. (“-It’s not appropriate. It’s not what? -Appropriate.”)

We’re hoping that these 15 minutes spent with us can help spark a mecanism of memories for the participants, even when they’ve gone out of the interview, and that by stimulating a conversation in a “safe” place slightly separated from the rest of what they experience during that day, they might be more open to encounters with strangers in their daily life…

Here are some extracts of some feedback we got during the day:

“It was pleasant to think back to my childhood. I was apprehensive at first but was put to ease by Horace. I was told to expect questions about my school years, but didn’t expect it to be deep and probing. I don’t think I have ever been interacted with by an art piece before.” Kamran, 28.

“It was great. It was different from the other artworks I’ve experienced before because of the interactivity, the focus on you as a participant and the ability to ask the artist questions.” Steph, 28.

We are going to develop the interview format during the future public events that will happen with Outsiderxchanges, and also devise a way for the artwork to be accessible when the interviews themselves are not possible. We’re currently working with Sophie on a video and a sound piece not being a mere documentation of the interviews, but a piece in its own right.

We’re really pleased by the enthusiasm that the participants have had so far and exited about the other works we want to develop together over the next few months!

Coinciding with Chorlton Arts Festival, on the 28th of May OutsiderXchanges will be welcoming the public into their studios to meet the participating artists and gain a unique insight into studio practice and artwork in the development stages of this exciting collaboration. The first public event at Castlefield Gallery’s New Art Spaces Chorlton, join us to see new work by OusiderXchanges artists, locally-based contemporary artists, and enjoy guided tours and a set by a cappella group Vocal Harum.
Meet the artists and find out about New Art Spaces, Castlefield Gallery’s initiative making temporarily empty properties available to artists to develop and present new work.

The Open Day is part of Chorlton Arts Festival http://www.chorltonartsfestival.com/